Background
Since the new licensing model for Citrix XenDesktop, which is based on named users and devices, I have customers asking questions like :

UDadmin commandline tool
Citrix provides a command line tool named UDadmin to control the license usage, it’s part of the Citrix Licensing server software and installed by default. You can find it in the LS directory of your license server installation directory. With this tool you can view and reclaim licenses, but it’s not really user friendly mainly because it runs in a cmd box and it requires the right parameters. To provide something easier to this customers I created a GUI around UDadmin :

UDadmin GUI
UDadmin GUI is a lightweight .NET application that visualizes the output of UDadmin, and provides an easy way to release single- or multiple licenses at once, just select them and hit release. I also added some additional features like exporting the current usage to PDF for reporting purposes. When you launch UDadmin GUI it determines the licensed feature for you, no configuration is required at all. Below is a screenshot of UDadmin GUI in action : 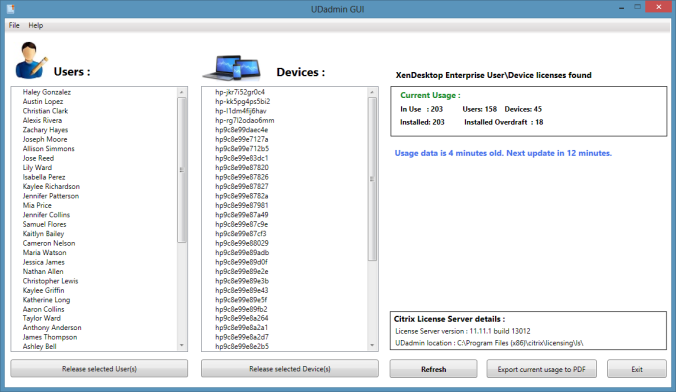 The XenDesktop named license usage is updated every 15 minutes, in UDadmin GUI you can see when the next update schedule occurs (in blue). So after releasing licenses the changes are reflected when the next update schedule runs. If you don’t want to wait that long there is also an option in UDadmin GUI to restart the Citrix Licensing service to reflect the updated usage directly afterwards :

In other words, you need to run UDadmin GUI on the same machine as where Citrix License Server is running, this is because Citrix doesn’t support running UDadmin remotely. UDadmin GUI works with XenDesktop Enterprise and Platinum edition, support for App edition will be included in a future version (very soon!).

Just like the UDadmin command line tool, UDadmin GUI needs administrative privileges to run properly. But don’t worry UDadmin GUI is UAC aware and will prompt you when necessary.

Availability
UDadmin GUI isn’t available and supported anymore at the moment. Sorry for the inconvenience.

= 1.2 =
– Added an option to restart the Citrix licensing service and refresh usage afterwards